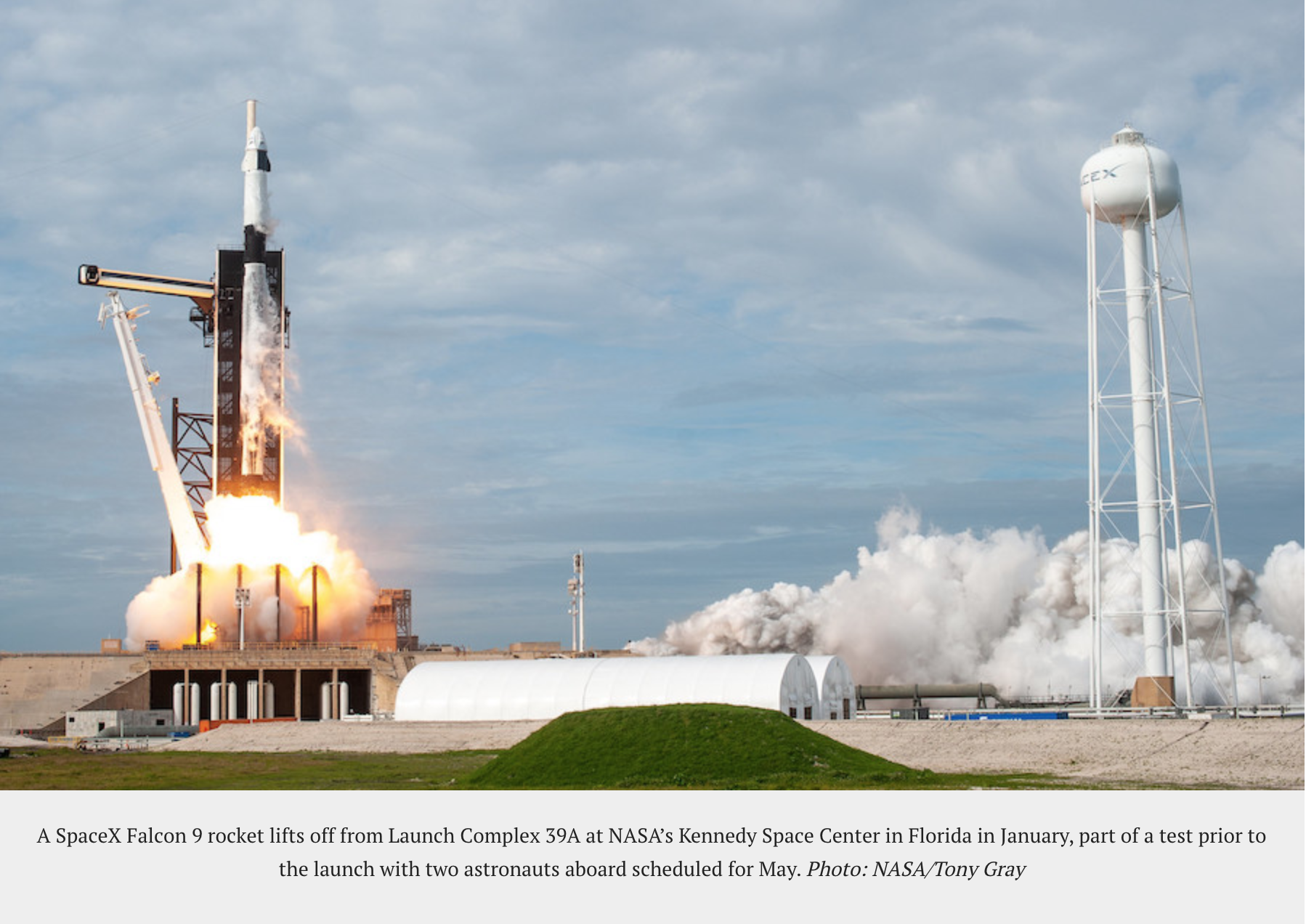 On May 27, NASA will publicize as an extraordinary event a comparatively routine activity: the launching of a spacecraft to carry astronauts to the International Space Station. What is remarkable about the launch is that it renews U.S.-run human space flight and opens an ambitious new chapter in U.S. space exploration and science.

Since 2011, the U.S. and its partners have paid the Russian space agency to ferry astronauts to the space lab 240 miles above earth. They use Russian rockets and spacecraft.

Those trips barely make a blip on the U.S. media radar any more.

This mission is being described as a make-or-break event for the Trump administration’s space policy. In recent days Vice President Mike Pence has said the launch will be a key in “renewing American leadership in space.”

The bigger significance of the U.S. mission is that it could shore up support in difficult times for the U.S. space program, NASA-the National Aeronautics and Space Administration, its $19-billion-a-year budget—and big engineering and construction companies that count on the agency for a lot of work.

Five companies in the ENR Top 500 Design Firms and Top 400 Contractors lists are among NASA’s biggest contract award winners from the previous year. They perform design engineering, testing and certification tasks on rockets and spacecraft built for the agency by the private aerospace contractors. They also perform studies and analyses, and they design and build needed facilities at 10 major NASA space centers around the country.

Jacobs, the publicly-traded (NYSE-J) Dallas-based engineering giant, says it is NASA’s biggest service provider. The space agency’s list of its top contract awards to businesses for 2019 puts Jacobs Technology in third place at $916 million, making up 6.34% of the year’s total. Only aerospace giants Boeing and Lockheed Martin Corp. ranked higher.

Other construction-related companies that won NASA contracts in fiscal 2019 are KBR Inc., at $613 million; Bechtel Group Inc., $297 million; AECOM, $164 million and The Walsh Group, $31 million. Other companies may be working on contracts won in prior years.

Jacobs counts NASA work as part of its Critical Missions Solutions segment. Robert V. Pragada, the firm’s chief operating officer and president, described what it does for NASA at the company’s conference for investors earlier this month. He called it “broad support” for the “accelerated work to meet the current administration’s mandate to return to the moon in 2024” under NASA’s Artemis program. Most of the work is being done as telework or with social distancing during the pandemic, he added.

Jacobs’ projects at the Johnson Space Center in Houston involve engineering design, testing and verification for work including the Artemis moon mission, under a not-to-exceed-type contract.

The latest two-year contract extension, from May 1, 2020 to April 30, 2022, announced in early May, is worth $478 million. If NASA chooses to use the full amount of the contract, the total maximum value of the work could reach $1.9 billion.

There were other recent NASA awards to Jacobs. In January, the agency designated the company as the sole provider of architect-engineering design and environmental engineering for various projects at the Marshall Space Flight Center in Huntsville, Ala., the main NASA operating center for propulsion, external tanks and payloads. The work will be done under a five-year indefinite delivery/quantity contract.

Depending on how it goes, the May 27 launch could hasten the changing dynamics of U.S. space science. The mission could increase the role of SpaceX and other private companies in the outsourcing of work formerly done by NASA. SpaceX, for example, will own the rockets and space craft it produces for NASA rather than simply designing and building them.

Space privatization is an international phenomenon, with numerous companies and countries participating.

Another big change is NASA’s gradual adoption of fixed-price contracts as opposed to uncapped cost-plus contracts. Such contracts are a way to limit cost overruns and they now account for the majority of NASA awards, the agency’s annual procurement report shows.

Congress and the Trump Administration have charged NASA with landing astronauts on the moon by 2024 and then proceeding to a crewed mission to Mars.

SpaceX, with its business model involving reusable rocket booster stages, has been distinguishing itself as a lower-cost provider of rockets for moon and Mars missions, working under fixed-price contracts.

A parallel program to accomplish the same missions, run by a team led by Boeing, is also operating under a fixed-price contract. But that program, known as the Space Launch System, was granted a $250-million change order three years ago and remains far over budget and behind schedule with total costs currently at around $17 billion. NASA’s inspector general  criticized the change order in a report issued in March.

Of course, the future of NASA’s budgets and space exploration could be limited because of the economic implications of the pandemic emergency. The agency’s space programs have never enjoyed total public support and its budget is down dramatically from its high points in the 1960s, when it accounted for 4.5% of total federal spending, according to research by NASA’s former staff historian.

The risks of space flight, no matter how routine, also are always a concern with crewed missions—even given SpaceX’s impressive progress.

In April 2019, one of its Dragon 2 spacecraft, which had flown a test mission without a crew the previous month, exploded during a static fire test of a launch abort system on its launch pad at the Kennedy Space Center, according to a NASA inspector general report.

Little public information came out at the time, but the inspector general noted that SpaceX had found the cause and made needed fixes. The accident pushed the previously scheduled December launch to its present May 27 date.